A Mistress and her Girl 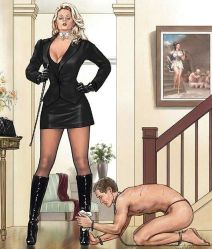 The idea for this post came to me while reading a comment by a regular contributor, Titiana, who is a mistress with a feminised submissive called Betty. It seems she’s a bit further ahead than me with her girl so I am a little envious, but her approach is very similar to my own. She wrote such common sense that I wanted to paraphrase her comment below here as a post

The key point is that feminisation of a male partner, whether they want it or not, has to be entirely to the benefit of the mistress and not the male being feminised. In many cases the male may well want it too but this is incidental to the relationship. However, since I’m living in the real world, then this relationship will be real and practical and what I write about are the real challenges I face in feminising my husband and living in a Female Led Relationship. I really want Alice to dress as a girl 24/7 right now but it’s not possible immediately. Anyway here’s the essence of what Titana wrote

Being a bully is not something I would recommend. Any programme of feminisation works best when it is slow, steady and as far as possible encouraged and participatory. I become firm with Betty only when there is any tendency or regression or backtracking. I will say that not wearing or forgetting her bra would be such an incident. In such cases the rule has to be reinforced but again not necessarily by force. I try and express my disappointment and add a dose of humiliation. Betty too feels guilty and tries to be extra careful going forward.
Feminisation is best progressed when the male is mentally conditioned. The platform is laid by frequent and regular conversations on what is expected of and for the feminised partner. Before Betty got her ears pierced I used to make her wear clip-on earrings regularly. I often spoke to her about how nice it would be if she had pierced ears and even went and bought nice earrings for her well in advance. We discussed the public reaction and how we could manage it. I kept encouraging her saying she will find a good way to explain to friends and family and indeed she did and was proud of it. Even now we frequently converse about future plans including electrolysis or laser for hair removal, breast enlargement and shaping her lips. All these are well in the future but each time we discuss the future Betty knows the direction and some milestones in our journey. Ideas that used to shock her , like breast enlargement are now discussed normally. She is being conditioned to accept this as a natural step forward. I don’t press the issue, but certainly set the direction and agenda for her transformation. As I said, it is important to introduce an element of normality into Betty behaving, thinking and becoming a girl in every aspect and all the time.
I want to convey that force is not the best way.

What an excellent piece of advice from a successful woman. This doesn’t mean that the real female in the relationship is not 100% in charge, it just means bringing the male along with you while you’re de-programming their social contruction and re-programming them into becoming a girl. This means helping them choose clothing, helping them with their make-up. Remember it will all be difficult at first so guidance and patience is essential. Eventually you’ll be rewarded with a submmisive girl who accepts their status in life rather than a feminised male who is either resentful or thinks it’s all a game.

I am a writer and a believer in the immense benefits of male feminisation and female domination. My blog records my true-life experiences in these areas. I also have several novels and a non-fiction book published on Amazon about forced feminisation which you can find under my pen name Lady Alexa. I live in a quiet corner of North London with my obedient and feminised husband/housewife.
View all posts by Lady Alexa →
This entry was posted in Female led relationships, feminisation, feminise husband, feminise your partner, Feminization, forced feminisation, forced feminization and tagged forced womanhood, husband in a dress, husband in a skirt, husband in female clothing, married sissy, petticoated, reluctant feminisation, sissy married, transgender. Bookmark the permalink.

10 Responses to A Mistress and her Girl