Joseph poses in his new dress

My yellow dress was pulled to my stomach, pink panties around my ankles. My exposed erection straining and pointing to heaven like an accusing finger. I was laying flat down on the high clinical-style bed. I cowered as Tia, the attractive young beautician, held a staple gun for piercing ears in her right hand while chatting to my wife Julie. Julie was giggling and swinging my pink plastic cock cage on an index finger. The grumbling sound of traffic filtered into the room from the front of the shop as Tia’s eyes flitted down at my penis every few seconds.

She told us she’d put rings into men’s foreskins before but she had never done it to a man wearing a short yellow summer dress and high-heeled pink shoes. Melissa had told me we were going for ‘some beauty treatment’. Now I understood that she didn’t mean a facial. The truth of the expedition was now stark and severe. She had just informed us all she wanted a ring inserted in my foreskin as part of my re-education. I replied I was reformed, no more affairs, no more drunkenness and I’d work diligently. I promised, Too late she had said. I had had my chance.

I was desperate to flee this virtual prison cell but Melissa’s glare pinned me back. It was enough to tell me of the consequences if I didn’t do as she ordered.

Melissa was standing at the bottom of the bed, a fixed glare on her hard set face. Her arms folded high, face and lips set tight. Long red-brown tussled hair fell onto and over bare shoulders. A tight short red dress hugged her voluminous breasts. My fingers ached to caress and fondle them. No chance. Ever. A black frill led to slim yet muscular legs. I didn’t want to have such a strong desire for her, this belligerent termagant. The worse she treated me the more I wanted her. It was odd, I didn’t understand it. Why did she have to be so damn sexy? 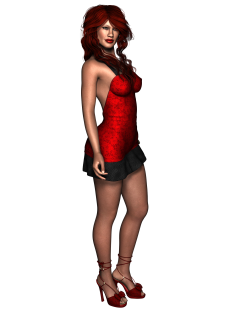 She tapped a red sandalled foot against the black-tiled floor. Tia the beautician had just informed her that she couldn’t pierce the end of my foreskin and clip the ring on until my erection had gone down. The skin was too tight for the clamps on her gun to fit around. I shuddered, becoming more desperate. My throat tight.

Julie thought the whole thing was amusing. I didn’t know what had got into her, she used to be so gentle and pliant. That’s what I had liked about her. She’s changed. Melissa threatened to attach a cat’s collar bell onto the ring once it was inserted. I hoped she was joking.

The salon backroom had no air-conditioning and my skin was clammy. It was designed for two people not four. My balls were laying loose and flattened against the white cotton bedsheet like two spread chicken legs waiting to be roasted. The smell of fresh paint from newly decorated pastel green walls combined in my nostrils with the perfumed scent from an air freshener on the chrome table by the bed. There was bile in my throat, whether that was the smell or the impending piercing was not clear.

Several jars of cream and cotton-wool balls for the pedicures and facials they usually did in the room sat on the table top. I had thought these were the reason for the visit. Now I knew otherwise. The piercing implement in the beautician’s raised hand caught the glint of the fluorescent lighting. I shivered at what she was soon to do despite the oppressive heat.

Behind Tia and Julie a white curtain separated us from the salon outside. Tia hadn’t pulled it fully across and I could see two women having their nails done by attendants in white face masks with elastic straps around their ears. The attendants glanced at me from time to time with cold unblinking eyes. I rubbed the back of my neck to wipe away the sweat, my long straightened hair sticking to the back of my head. Beyond the attendants the late-morning July sunlight streamed through the shop-front windows. I had asked Tia to close the curtain properly but Melissa had barked at me to shut up and to lose the erection.

I wanted to run but Melissa’s glare intensified at my fidgeting. If I didn’t do as she ordered, I would lose my job with her and be evicted from my home. Or more accurately, the home owned by my wife Julie’s parents. I’d be on the street, penniless and with only women’s clothes to wear. I was trapped. It was only two days ago that Melissa had led the destruction of all my male clothing and replaced them with a female wardrobe. All I had were skirts and dresses, panties and high heels.

“Do her ears first then we’ll come back to the clitty ring.” Melissa’s face remained fixed, impassive. It was if a man with an exposed erection in a dress about to have a penis ring inserted was an everyday occurance

I sat up. “Ears, what do you mean ears?” Each new piece of information unwrapping her unwanted present to me, hitting me like an arrow flying into my forehead.

Tia moved over and clipped the gun on my left earlobe and pressed. Click. A sharp pain. I squealed an “ow” then put my hand to my lobe and it met a small circular metal object. Tia leant across me as I touched the lobe with thumb and forefinger. Small breasts rubbed on my chest and for a moment an excitement went through my skin. It passed as quickly as It had come as a sharp pain hit my other lobe. Tia moved away, her elbow brushing against my erection. She looked down at it nervously. I held both hand before my eyes. There were spots of blood on both sets of fingers where I’d touched my lobes. She had pierced my ears and I had earrings. I had pierced ears. Things were escalating and I didn’t know how to stop them. Julie’s eyes widened and then she fell into a fit of giggles. Melissa was looking at her watch. Her foot was tapping again.

A hand on the curtain caught my eye. A young lady in a white top ducked into the crowded room and asked Tia for a cream. She then spotted my erection, red and proud like a missile about to detonate. A trickle of pre-cum dripped down the back to my balls. Her eyes followed it for a few moments as her mouth dropped. She mumbled a sorry and shot out leaving the curtain even further open.

“I can’t wait any more I’ve got things to do. Pass me those rubber gloves.” Melissa snatched them from a wary Tia and snapped them on and grabbed my erection. I squealed as she pulled on my foreskin. “I want that ring in her clitty now.”

Melissa tugged and stretched the skin with both gloved hands. She managed to pull it half an inch away from the tip of my tortured penis. “Now. Tia. Do it.”

Tia’s hands were like a blur as she clipped the gun clamps on and pressed. A bolt of pain. I screamed as it pierced through the skin. She withdrew and a gold ring sat through the foreskin. Melissa let go and it slid back to expose my red bulbous penis head. Despite the shock I wanted to cum. That wasn’t going to happen, Melissa had banned that. Melissa ripped off her surgical gloves and dropped them on the floor. She fished in her handbag and produced a small cat bell. She lifted it and for the first time her closed lips turned up at the edges. She rang the tiny bell by the side of her head. ‘Tinkle tinkle’. She then clipped it on the ring and told me to stand up. She hadn’t been joking. I was mortified to see this symbol of my utter humiliation. Not just female clothing but now a pet’s bell? Tia made an excuse about the next customer and left through the curtain in haste. I slid off the bed to the sound of a tinkle from the bell. I fought the anger at Melissa’s latest trick, I had to calm down. I couldn’t win.

“Walk Joanne. Hold your dress up to your stomach.” Melissa’s hands had folded again across her body.

This is my first draft of the first chapter of my latest book, Becoming Joanne Part 2. It’s still being written but I thought I’d share Joseph’s descent into a humiliated submissive girl at the hands of the bossy Mellissa.

Keep checking for updates on part two of my most popular book to date.

I am a writer and a believer in the immense benefits of male feminisation and female domination. My blog records my true-life experiences in these areas. I also have several novels and a non-fiction book published on Amazon about forced feminisation which you can find under my pen name Lady Alexa. I live in a quiet corner of North London with my obedient and feminised husband/housewife.
View all posts by Lady Alexa →
This entry was posted in Female led relationships, femdom, feminisation, feminisation stories, feminise your partner, Feminization, forced feminisaton, forced feminization, humiliation, husband in a dress and tagged bimbofication, Female led relationships, forced womanhood, humiliate, humiliated husband, transgender. Bookmark the permalink.

18 Responses to Becoming a submissive girl